Updates from the herd. 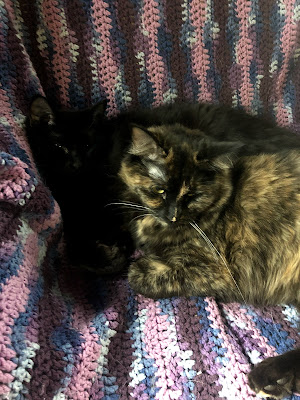 Last year's barn kittens (Kali and Jake) are now ENORMOUS. (They both top 9 lbs) They still like to snuggle together. Littermates. 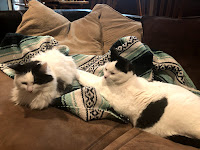 And... Kali and Lulu are getting to be friends too! (Mostly, they both like to sleep on me at night.) 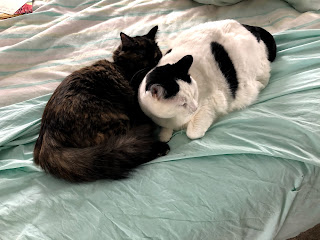 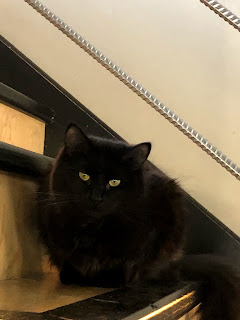 Gratuitous Jake picture - isn't he pretty? he is the most spoiled and beloved of kittens. We've decided he's practically perfect in every way.
And how cute is tiny Ayita? (Reminder - she's our resident snake-killing and fox chasing cat.) 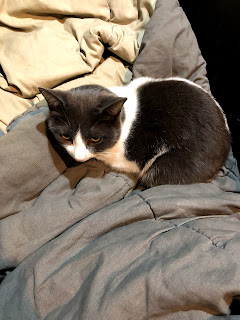 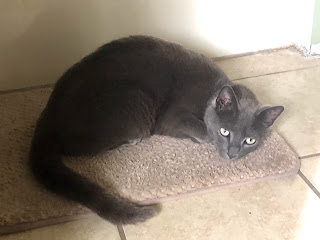 I surprised Grey and caught his photo.  (Also a photo could not capture his purriness. He purrs non-stop.) 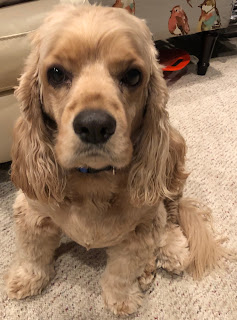 Rusty demanded an update where he looked more serious. 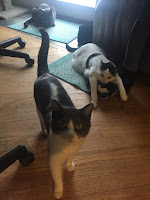 Well, as I've adjusted to my new space and new life (with Guy and the kidlets), the  cats have gotten used to each other. (In this pic, I spent the morning shoveling, but Lulu was exhausted.) Ayita likes to photo-bomb pictures and Grey wants to play in the snow. 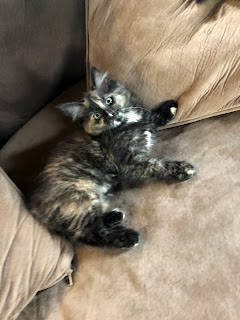 And we threw a curveball into the mix this May by adding two adorable barn kittens. (Yes, that brings us to 6 cats and a dog. But we're down a kid.)

To the right is Kali June. (Current weight, 2.13 lbs which is a substantial increase from the 1.12 she weighed when we got her. Tiny and fierce!) She's a purr monster and wild child. 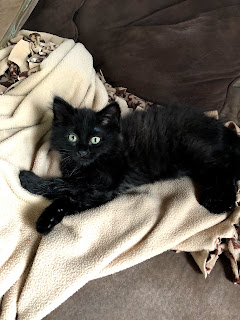 So far the bigger kitties are not super interested in the kittens - although Lulu is a bit afraid of them. Rusty is not super fond of them - they move fast and are a little strange. But he does like to check on them if they cry while in their cage. 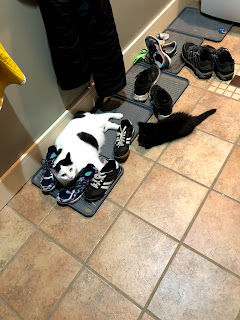 7/10/18 Update - Lulu is terrified of the kittens. Jake recently corralled her in the laundry room as she was doing her favorite chill move - laying on the kids' shoes. At this point in his life Jake weighed about 2lb. Lulu weighs 14 lbs. 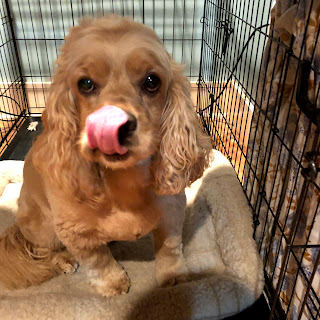 Oh, and Rusty wanted a new photo on here. I caught him pre-sad face. Hence, he looks ridiculous. 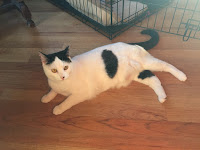 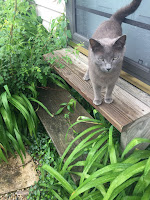 Things change. Lulu grew up (picture left). She's now very big and yet very timid; she also seems to think she may be a dog like Rusty.  (That's his cage she's in front of - and just came out of. She hangs out in there when he is out.) Coco is still tiny and feisty -- she mostly rules the house. Rusty is beloved. And the latest moves joined our household to one that included Grey Kitty (aka Wolf Kitty - image right and below) and Ayita - the snake killing cat. They are about 7 years old. They are the last of their sibling set; originally there were 6. But as outside/inside kitties (in addition to bird casualties) they have a shorter life span. 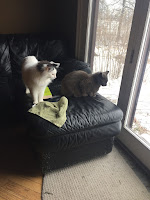 This is Grey Kitty. He's a little timid. And has a big purr. (Must be a grey cat thing - like Griffin, he purrs at everything.) He was completely terrified of Rusty  at first but now they do the guy nose bump. (I find it amusing that both the "boys" in the house are solid colors.) And of course, that's Coco being Grey's friend while standing on Rusty's paw wipe cloth - a paw in both worlds, that one. 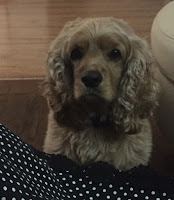 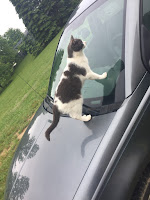 The girls are all white with solid colors. Coco and Lulu are both black and white. Ayita, like her brother, is grey - but grey and white. (I also find it amusing that all the girls are "spotted" as La Gram Russe liked to say. She also thought spotted kitties were sneaky.)  This is a picture of Ayita in her element - outside. (Left.) She's often out there killing snakes - she hunts them in a nearby creek.  And voles. And pretty much anything else she spots. She's a very efficient predator. 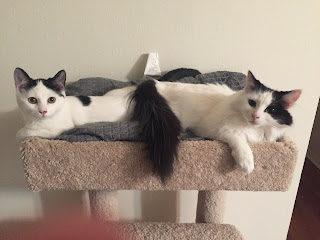 2016
Heading into 2016 - Things have shifted. The male human and I split. So, the herd had to be split. Coco and Lulu stayed with me. (This is them in their new space.)  Rusty stayed with the male human who originally adopted him. He's now a solo puppy.

Rusty misses his kitty friends. And they miss him. (I miss him!) But like the song says, life's about change and nothing ever stays the same. 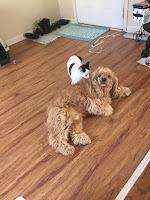 Update 4/2016 - Rusty came to stay with us at Bunny Haven Manor (temporary) North. He's a very happy puppy to be back with his kitty friends. He and Coco re-bonded very quickly, as I expected. (The first night, I woke up to them sitting quietly and touching paws.)  Unexpected is now much Lulu likes him. She always wants to know what he is doing. She follows him around and likes to lay near him.  And when she cries - which she does for attention - he goes to find her. 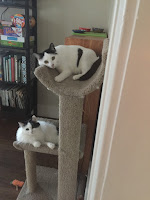 It took less than 2 days for everyone to settle into a routine. It's not perfect. But it's life - in progress. 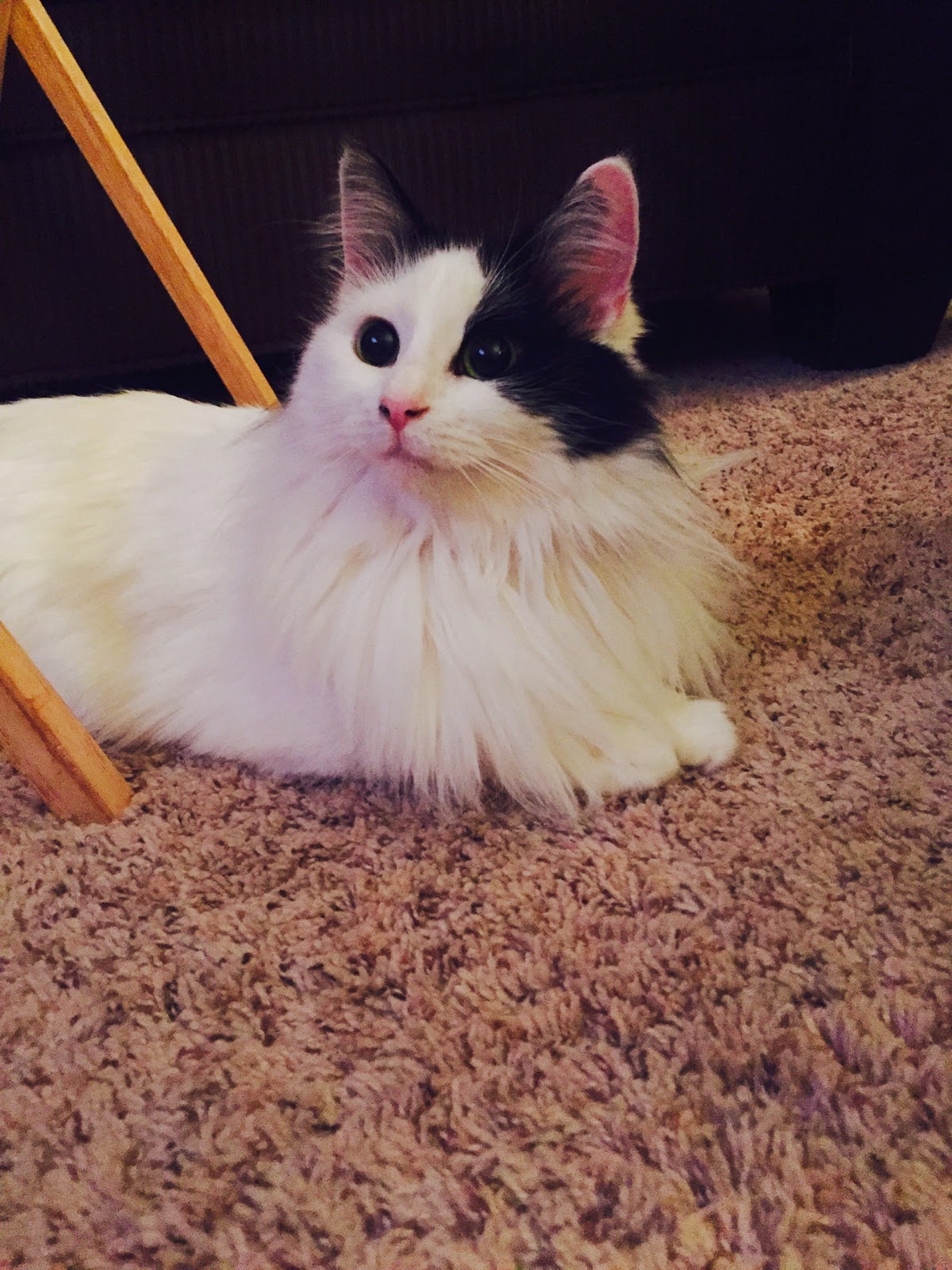 Life changes all the time. In January 2015, it changed again at Bunny Haven Manor East with the arrival of Coco. (As in Chanel, Puffs or Nut - depending on her attitude.) 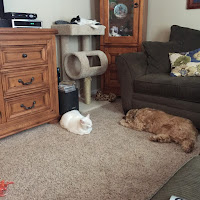 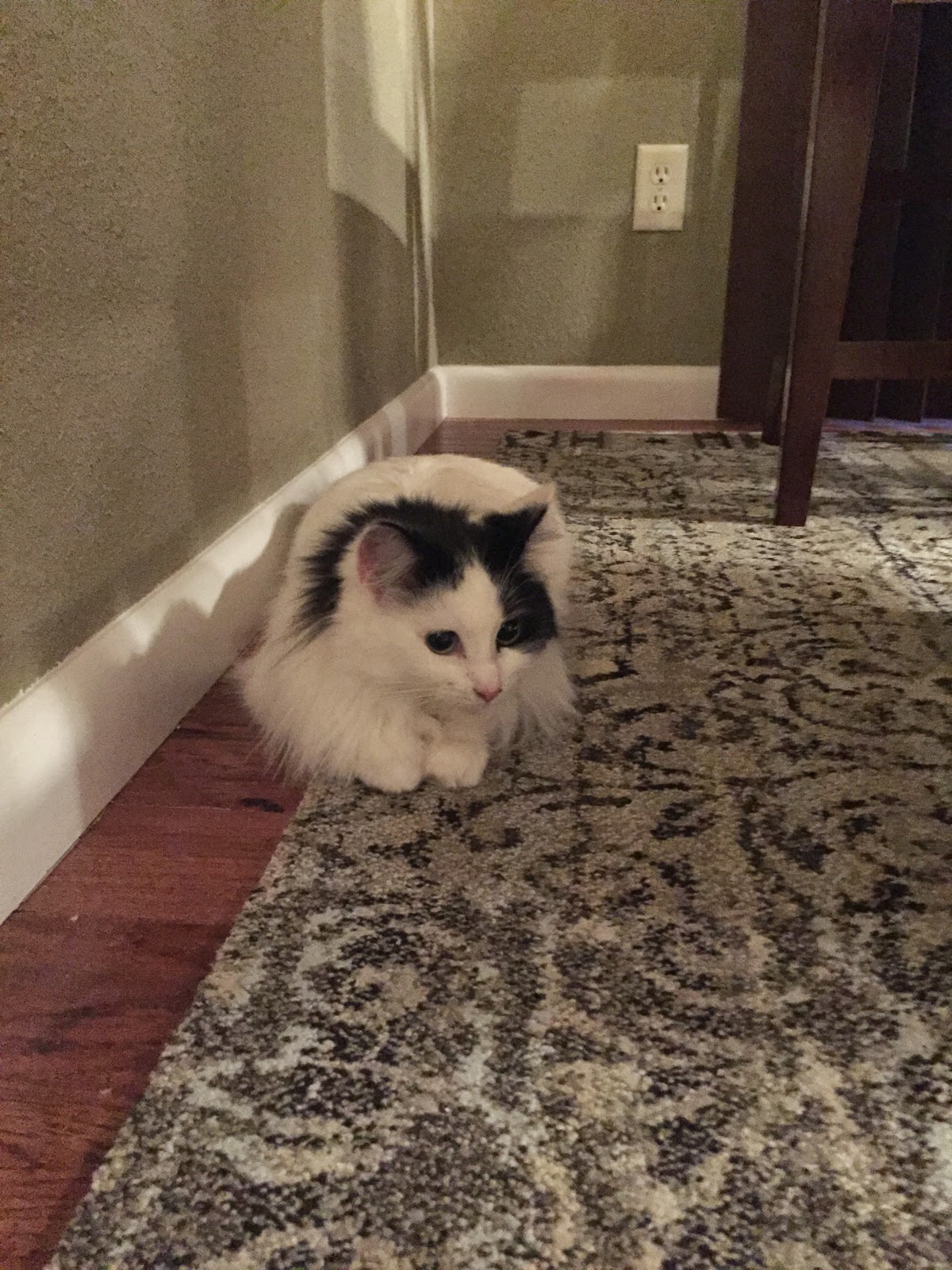 She's pretty much taken over the house. She's fearless about the puppy and eats from his bowl. (Rusty lets her. We do try to discourage it.) She even takes his toys. She's trying to make friends with Killian. (She knows he's "different" but she's not figured out why.) Right now she's more interested in Killian than he is in her. To be honest, he's a little terrified of her - despite the fact she's 1/2 his size!

We've discovered she loves looking out the patio door. I expect, come summer I may be able to snag an image of all three of them looking out. Right now I just like the one of all of them together! 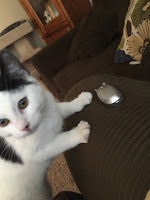 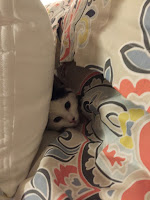 11/2015 Update - We've had an addition to the family, Lulu! She looks like a tiny, short-haired Coco but is about 3x as wild.  (She's Patrice in this video as a tiny kitten and in this video at 9 weeks. She was 12 weeks when she joined Bunny Haven.) So far, two weeks in, the male human loves her; Rusty likes her; and Coco is interested in her. Coco actually reminds me of how beloved niece treats her little sister....

BEFORE
Changes have happened. As of January 2014, our world is different. Killian and I moved east, a bit. And the new place came with a puppy (okay, young dog - technically) and his male human. So, now we're working on pet integration.

There is also a new garden area for me to work in. A new space for me to decorate. Change is part of life. This is just one of many. But the pets do still rule the house. And I'm on the look out for my new lawn bunnies!


5/2014 Update - the Male Human comes home and demands "Where is my cat?" and the Killian follows the Male Human around. The puppy follows the cat around. Killian is pretty sure the puppy is stupid. And as soon as the garden went in, the bunnies came to visit. Welcome to Bunny Haven Manor East!

This was originally written on another blog. One that celebrated my life with my (now ex-) husband. Until he decided that being married wasn't what he wanted. The page evolved - I added a bit with Updates at the bottom on how the Herd is doing - but has remained mostly since 2011. And that was "then". Things have changed as you'll note above.

Bunny Haven is ruled by small herd of felines with velvet paws.  They are: Wesley (speckled and way too smart - also really photogenic), Griffin (grey, fluffy and sweet), Killian (white, deaf and sweet), and Molly (black, the youngest). All but Griffin came from the local Pet Refuge over the last 10 years.

Griffin was the first.  He found me at the SB Farmer's Market. (I was supposed to be sky-diving, but the wind was too high for my first solo jump.) I really did not want a kitten. I was going to get an adult cat - the kind that most people don't want - from the Pet Refuge in a month or two. But he was just mine from the second I picked him up. (Note for future - do not pick up the kittens!)

Wesley was the second. He came from a Pet Refuge adoption event. (He'd been previously adopted and returned.) Again, I was supposed to be sky-diving but the winds were too high for my first solo jump. At that point I decided to stop trying to jump from a perfectly good airplane because the disappointment of not-doing so was causing me to compensate with cats!

And we were perfectly happy for about 6 years. Then I got Bunny Haven Manor, and my boys stopped playing nicely. Every day, the house just looked like a whirlwind went through it. So I got them a friend, Killian, at a Pet Refuge adoption event. He was 3 when we got him; he'd also been previously adopted and returned - twice.  (Still can't figure that out as he is a fabulous cat!) Griffin made friends immediately. Wesley took longer, but eventually they became best friends. (Ugh that floor - totally needs refinished. Soon....) 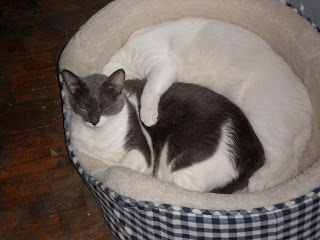 I was done at that point. I had a cat color set - one white, one grey/white, and one grey. All done.


Molly was to be Griffin's friend. Luckily that worked well. She turned 2 years old the week we got her; she'd been at the Pet Refuge for the last 18 months of her life after someone adopted and returned her. (Black cat fact  - due to prejudice and superstition, black cats take 4 times longer to be adopted than cats of other colors.)

2/17/11 Update - Peter explained to me today that Molly isn't really spoiled. She's just the queen of the house and gets whatever she wants. (I guess it's a good thing I'm the empress and still outrank her...)

We're really done now; we've hit the legal limit for our county - unless we buy acreage! (If that happens, I am SOOOOO getting a pony...)

10/23/12 Update - Molly has gone to live with Peter. She's doing great as a single cat. The boys are slowly adjusting to her absence. Griffin did not eat the first 3 days. The other two are being extra nice to him. We're all adjusting to the many life changes.

1/18/14 Update - Wesley's health became too precarious and I laid him to rest.