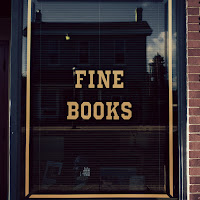 This Page has always been about books - what's on my shelf, what I'm reading, and (sometimes) what my friends wrote. (To see/purchase what I have written - click here to go to my GumRoad page.)

I do like a good book. The last time I moved, the movers said "Ma'am, we moved a doctor last week. You have more books than he does."

They weren't wrong. My books are not my treasured possessions. They are my friends. My portal to new worlds (of imagination or knowledge - depends on the book.) I read when I'm happy; I read when I'm sad; I read when I'm tired. I read. When I have extra $$, I buy books (and perfume - but that's another story). I am "a book person".

"She is too fond of books, and it has addled her brain."
- Louisa May Alcott

I've stopped tallying - for the most part - audiobooks versus digital books versus physical books. Here's the thing - if it's easy reading, digital works for me (And Kindle Unlimited has made that super affordable.) I do get bored of audiobooks, so I don't do many of those. If it requires concentration (like a book I would learn from - a business book or spiritual book), it's likely to be a physical book because my brain retains those better. I do have a good number of physical books from that "one" time I could not resist around the house which I'm trying to power through and then share out in Little Free Libraries or distribute to friends. (No Marie Kondo, I'm not just throwing them out.)

2018 started off to be another slower reading year. Not even one book a week! (After college I remember reading 2 books a week at minimum. I wonder where that time went?) August Update - A friend told me her one book per week goal, and it seemed reasonable. So, now I'm hitting about 1 book a week if you average it. (But what I'm really doing is binging books. 3 one week, none for several weeks.)


2017 was like the year of reading that wasn't. Time has just been at such a premium! But what I did read has been documented a good bit via my new favorite app, Quotle. (I've also included links the books I loved.)


I've read that Elon Musk is not a fan of business books. And so, I apologize not for the lessons I learn in other genres.

2016 was the year of fiction reading. (Business, too I expect - but it started with Irish literature.) But I didn't read enough books to do the write-ups I started a few years ago. So, I wrapped up notes on what I read in the monthly updates (Currently, Month) but here's the short list:


2015 started with a a bit of self-reflection in January and has progressed.