I think about color more often than I should.  I love color. The richness. The endless variety. Blue will always be a favorite (I even have a book about the History of Blue).  Which means, of course, that I rather ravenously follow Pantone on Twitter. Did you know they tweet out a color of the day? It's almost life-changing*.

And in 2014, I had a theory about Pantone occur. I decided - based on the "evidence" - that the Pantone color team could viably be basing their choice for color of the year on the Chinese New Year.

- 2012 - year of the dragon/Pantone color of the year was tangerine. Orange dragon. YES. Also fire is usually depicted as orange. (Side note: I love orange, specifically orange food.)

- 2013 - year of the snake/Pantone color of the year was emerald.  Green snake. YES. What is the first color you think of when drawing a snake? And I love the vibe of change that green brings.

- 2014 - year of the horse/Pantone color of the year is orchid. I can only think an orchid horse = My Little Pony. But still, the correlation remains as I noted I exploring orchid in a 2014 post. 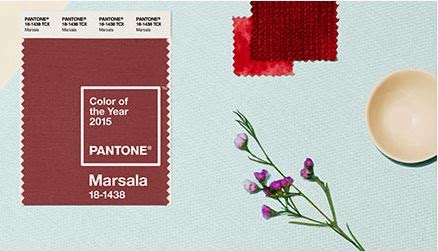 - 2015 - Pantone color of the year is "Marsala"  - it's a reddish brown that reminds me more of dried blood than than wine. And I truly think I'm onto something with the Chinese zodiac idea. Most know 2015 as the year of the sheep. But 2015 can also be called the year of the goat, and the corresponding colors are brown, red, purple - all of which can be found in Marsala.


And then in  2016 -  year of the monkey - Pantone threw me a loop by pulling a double for color of the year. Rose Quartz and Serenity. Neither of which had any Year of the Monkey correlation. This breaks the streak of the Pantone basing their color on the Chinese New Year. All streaks have to come to an end.

The recent announcement of Greenery as the 2017 Color of the Year  proves the streak is over. Roosters aren't usually green. It's odd to be repeating a recent color - Emerald in 2013 is a rich, opulent, grown-up green. Greenery is all spring freshness and new beginnings, growth. It also pairs well with a wide variety of other colors - making it a good partner color.

So, it's over - this random thought that started in my  Random ideas file and became a full blog post as it grew. Proof that nothing stays the same.


Take-away: Change is the only constant. Growth is the best outcome of change. Maybe it's time to figure out how to change growth into bloom.

Other color posts of potential interest:

*Except they do this annoying thing where the link is generic. Would it kill them to do an image shot with text? Or make the links specific to the day? Come on Pantone - step it up! I