The Herd Minus One

It's been a rough month at Bunny Haven Manor. People, pets and places - all unexpectedly stressful. A quick business jaunt to Canada. La Gram Russe breaking a femur and being at a rehab place to recover. An unexpected illness and extra work.

Plus, all the Herd has been ill in various forms. Killian is expected, as his diabetes is hard to control and has complications. Wesley is expected with his heart murmur, bladder and kidney issues. In July his heart became enlarged and he is now in heart failure, which we are managing with medicine. Griffin, except for one brief episode 3 years ago, is never sick.

I've recorded Audioboos about Wesley and Killian. But not Griffin. Because Griffin was always well and happy; and we had until forever. Today was the end of forever. I held him until he stopped purring. He only stopped purring when his heart stopped.


This is Griffin's story.

It was May. I was supposed to be skydiving. The winds were too high, so I went to the farmer's market. In a basket where 3 kittens - 2 black, 1 lavender gray. I reached to pet the gray one. Then I stopped and asked if any were girls as I only get girl kittens (less trouble I thought). No. I petted the gray one. He purred. I told the man with the basket that I did not really want a kitten. I was getting an adult cat from the local rescue, as that was the responsible thing to do. Then I picked up the gray one. He looked at me with his big eyes and sweet face - and I was lost.  He came home with me and took over my world.

He refused the names I chose for him. He picked his own name from the titles of books I read off while exercising. (I get bored.) He answered when I read off Nick Bantock's book, Griffin and Sabine. I'd have preferred Nick or even Bantock.  But his name was Griffin. He just knew.

He got into everything. (Someday I'll post the picture of him in the bookcase.) I built "Griffin bafflers" to keep him safe. He took delight in defeating them. He thought it just fine to "pre-warm" my clean towels while I was in the shower. (Ick.) He "helped" me exercise by attaching himself to my ankle during leg lifts. He played like a wild thing. He was lonely when I wasn't there. I got him a friend (Wesley).

My mother taught him bad habits. She let him look in her purse for toys she hid for him. He took that as justification to rifle through purses and bags at will and take out anything that looked "fun". (Slightly embarrassing when he took money out of my friends' purses.) He liked shiny things and tools. He would "play" with them when workmen came over - which usually meant the workmen had to call me the next day and ask if I'd seen whatever tool they misplaced (aka Griffin stole).

When we moved, I brought him to the house while I cleaned, before I even had furniture here. He loved the house. He staked out his favorite places. He climbed on top of the kitchen cabinets (verboten, but he did it). He sat in the window of the basement and watched the outside. He snuck out on the patio. Bunny Haven Manor was his house. He just knew.

We brought home Killian when Wesley became less playful. Griffin made friends immediately. He loved Killian. Just like he loved Wesley and later Molly. He snuggled with them. He washed their faces. He instigated play. He was very happy in his kitty world at Bunny Haven Manor. This was his world. He just knew.

When Molly left last year, his heart broke. He was so sad. Eventually, time helped him be less sad, but he stopped being joyful. A few months ago, he stopped acting like himself. Since both Wesley and Killian were various kinds of ill/distressed, Griffin's behavior was not immediately apparent. Then he began to urinate blood. We went to the vet. He was better. And then he wasn't. And then he was better again. And then he was worse. He lost weight (nearly 3 pounds in a month). Last night, he was in distress, so we went to the emergency vet. They discovered the blood was just a stress reaction to the real issue - lung cancer. We made him comfortable. I took him to our regular vet today. They confirmed with the totality of his symptoms, it was most likely lung cancer - aggressive and advanced.

I'm not sure I did the "right" thing. Maybe I could've waited. Maybe we could've tried treatment (they do chemo on cats now). But here is what I just knew: I could not bear to see him in any more pain. At the end of the day, he is a cat. You can not explain the why of pain to a cat. I did not want the time he had left to be riddled with pain. So I held him until he stopped purring. I cried. The vet cried.

I don't know that it's a herd anymore. We lost Molly to the divorce. Now Griffin to cancer. It's just Killian and Wesley now. Bunny Haven Manor seems bigger and emptier. I know my heart is emptier without Griffin.

Take-away - This probably isn't the best piece I've ever written. It doesn't matter. It's about love, and it's honest - that counts. 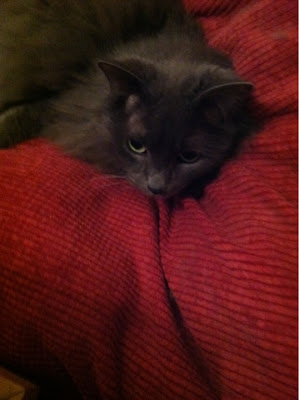